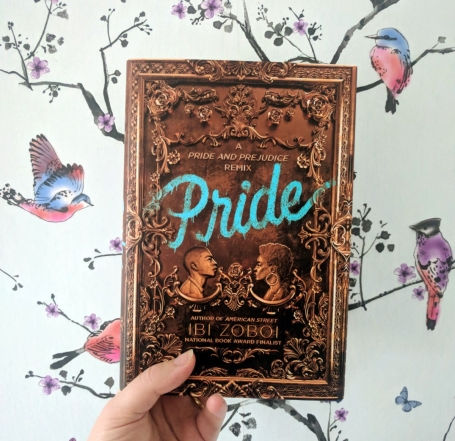 Zuri Benitez has pride. Brooklyn pride, family pride, and pride in her Afro-Latino roots. But pride might not be enough to save her rapidly gentrifying neighborhood from becoming unrecognizable.

When the wealthy Darcy family moves in across the street, Zuri wants nothing to do with their two teenage sons, even as her older sister, Janae, starts to fall for the charming Ainsley. She especially can’t stand the judgmental and arrogant Darius. Yet as Zuri and Darius are forced to find common ground, their initial dislike shifts into an unexpected understanding.

But with four wild sisters pulling her in different directions, cute boy Warren vying for her attention, and college applications hovering on the horizon, Zuri fights to find her place in Bushwick’s changing landscape, or lose it all.

I have been a fan of Pride and Prejudice since I was about 14 years old. It’s almost a family book – my mother, my aunts and uncles, my cousins, we all love it. I’ve mentioned before that I am always on the lookout for good adaptations, so when I heard Pride was being released this year it immediately went on my wish list. I will admit, it took a little to settle into. It’s a first person narrative, so Zuri’s voice is extremely strong throughout – there is no avoiding her slang and patter, and it feels so starkly different from the original that it seems a shock. I’m about as far removed from the subject matter as is possible, my experiences and vocabulary as a white, middle-class, English woman are very different from those of a black, working-class, American girl of Haitian/Dominican descent in Brooklyn. I have seen reviews which critique the vocabulary and narrative style used, but I wonder if perhaps those people are clinging too closely to the very English satire of manners from the source material, and not considering the book in its own right. I also struggled with some of the other changes – the cast being teenagers perhaps made sense for them all to still be living at home, but I’ve never read a version where the cast were teenagers. The Darcy and Bingley characters being brothers changed the dynamic a little too, so did making Darcy the younger rather than the older. There’s a different balance of power there, and in how that plays out, but as the Jane/Bingley storyline actually became less important in this version, that proved to be something of a non-issue. I’ll admit, I struggled to settle into things a little at first, but what helped me was the richness of the text when it was allowed to move away from the origin story and develop its own setting and show its own strengths.

Zoboi has a real knack for describing places with all the senses, and giving the sense of a full, rich, and warm local community. In a twist on the original, Zuri loves home and her family passionately, her roots there are very grounded. The Benitez parents love each other too, despite their differences in character. Love is very much the recurring theme – modern adaptations of Pride and Prejudice could easily become cynical if the social mores from Regency England are applied too closely, but Zoboi jettisons those with confidence and whilst Zuri is sometimes embarrassed by her family (who isn’t?), she loves and admires all of them. This isn’t a case of Elizabeth who is stuck at home by choice, and Darcy saying “You cannot have a right to such very strong local attachment” when discussing how far away from home to move, this is someone who has made plans to stay where she wants to be. The issue is that the neighbourhood is changing around her, becoming gentrified and people are being priced out of it before her very eyes. Her beef with Darius isn’t just with him but what he represents – change, on a broader scale, to the area she loves.

Even more than the original text, Pride is very much a clash of social classes. I once had an argument with a lecturer who patently hadn’t read the book he was teaching, the Bennets and Darcy at the same class, (“He is a gentleman; I am a gentleman’s daughter. So far we are equal”) just at different ends of it. The lecturer insisted the Bennets were middle class, but Mr Bennet had his own estate, no profession, and an entailment. He was a gentleman. The Gardiner side of the family – Mrs Bennet’s siblings – were middle class because her brother and brother-in-law had professions, tradesman and solicitor respectively (hence Lady Catherine’s response of “But who was your mother? Who are your uncles and aunts?”), but Elizabeth is from the same world as Mr Darcy, and she knows all the rules. In Pride, Zuri and Darius might as well come from different countries, the social gap between the two is far more significant and the rules between each culture so different. In Pride and Prejudice the issue isn’t that Elizabeth doesn’t know the rules, it’s that her family choose to ignore them – in Pride each side behaves by the rules which are correct and acceptable for the society they know, and it’s this culture clash which creates the tension. The sense of this is particularly true from Zuri’s side as, by nature of her perspective, we see far more of her culture and its richness, and only see what she deems relevant of Darius’ culture. Perhaps the book would benefit from being less unbalanced, if it gave us more of a view into his life, but then the book’s whole narrative would have to be restructured away from Zuri.

I can understand why the book was titled Pride, because whilst there is prejudice it comes more from Zuri’s own pride in herself, her identity, and her culture. She digs herself into her origins and embraces them wholeheartedly, and by comparison Darius’ world seems sterile and cold. We see glimpses as the book progresses which suggest otherwise for at least Darius himself if not his whole family, but we also get a sense that he is not as comfortable or grounded in his own identity as Zuri is, that he changes himself depending on the people around him – for his own comfort, if not theirs.

There is so much which can be taken from this book, it’s rich not just in description but in sheer content which can be parsed between the lines. I think it might be hard for readers who are particularly attached to Pride and Prejudice to necessarily get behind it, but if you’re able to view it critically as a reimagining and consider the new context and the deeper meanings behind it, there is so much there. A full comparison of the two would be really interesting. I love a book that gives me more the more I think about it, and this was one. 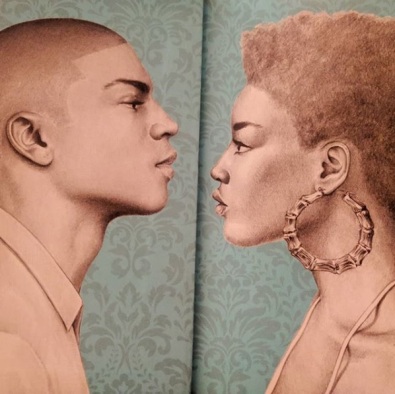 Rating: 4/5 – There is a lot to be gained from this book, but I think the only reason I didn’t give it five full stars is my own feeling of hesitance at the beginning as I tried to settle into the narrative style. It’s so rich, though,  and cleverly done that I would recommend it to any scholars of the original.

As a postscript, it also seems fitting that the last review of the year is of an adaptation of one of my favourite books. Happy 2019, everybody!