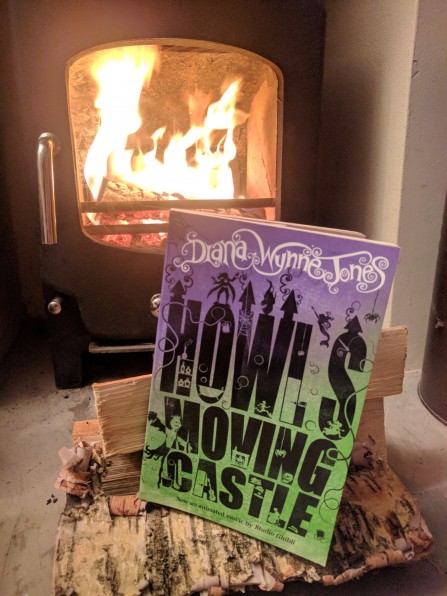 In the land of Ingary, where seven league boots and cloaks of invisibility do exist, Sophie Hatter catches the unwelcome attention of the Witch of the Waste and is put under a spell.

Deciding she has nothing more to lose, she makes her way to the moving castle that hovers on the hills above Market Chipping. But the castle belongs to the dreaded Wizard Howl whose appetite, they say, is satisfied only by the souls of young girls… There she meets Michael, Howl’s apprentice, and Calcifer the Fire Demon, with whom she agrees a pact.

But Sophie isn’t the only one under a curse – her entanglements with Calcifer, Howl, and Michael, and her quest to break her curse is both gripping – and howlingly funny!

I saw Howl’s Moving Castle for the first time back in high school. It was one of my first Ghibli films, and remains one of my favourites to this day. I always preferred it over Spirited Away because I found the cyclical ending of Spirited Away very frustrating – the fact that the ending shot of Chihiro clinging to her father’s arm is identical to the shot prior to her adventures seemed dissatisfying, as I felt it undid all the incredible character development she had undergone in learning to stand on her own and gain inner strength and independence. Had the mirroring been different, less identical, maybe I would have seen the poetic message of it. That things are returning to what they were, but not quite because Chihiro herself is different even as the world is the same. As I’ve grown and become more exposed to world cinema, I realised that there is something particularly Japanese about the story structure, where endings are rarely easy or triumphant in the way I had come to expect from British and American media. Part of the reason I enjoyed Howl’s Moving Castle so much initially was that it was based on a Western novel, and so had a story structure I understood and was familiar with – the character development carried through, and you saw an ending which resolved the narrative and journey of the characters.

I honestly don’t know why it took me so long to get around to reading the book. Diana Wynne Jones has long been a household name, my brother read loads of her books (although not, as it happens, Howl’s Moving Castle) as a kid, and obviously her sad death led to a huge upsurge in awareness of her following the condolences of authors like Neil Gaiman. So, back in October, when I was killing some time in Waterstones and hanging around the children’s section with my cousin’s daughter, I saw it. And I bought it.

My first thought was ‘wow, Ghibli got it spot on’. Not, it must be said, in terms of story or setting, but in terms of tone. Sophie’s pragmatic commentary felt so familiar and delightful that I was able to hear her from the film, and Calcifer’s movements and dialogue were almost exactly captured by the animators and VAs. Ghibli have naturally added their own stylistic spin on the design, and pruned and restructured plot elements which would be difficult to translate culturally, but it is still in all essence, Howl’s Moving Castle. The result was that, whilst the plot in the book was actually new and unexpected, the characters felt comfortingly familiar, and certain scenes in the film which were very like the book became additional touchstones for that familiarity.

What really comes from the book is that little bit more to flesh out the characters, that little bit more to show them growing. I particularly loved having Sophie as the narrative perspective – 3rd person limited is one of my favourite types of perspective, and when the tone of voice is such a wonderful character it made it a real delight. I adore Sophie’s pragmatism, something which I feel I find rarely in books, but I loved seeing her personality grow and change around that too. Her shyness and anxiety at the start never really seems to quash this matter-of-fact spirit, and the curse seems to set it free to force its will on the world. Instead of making her feeble and weak, becoming elderly seems to give Sophie the certainty to change the world to fit her own view. It’s so wonderful to read.

Perhaps the most notable change of plot between the film and the book is that instead of having a war which Howl is being called to fight in, Howl is fleeing the Witch of the Waste, who is a much more formidable opponent in the book; and the Wales storyline. The black colour on the door leads, not to the centre of  a warzone, but to Wales, where Howl is originally from. This cross-dimensional nod was a bit jarring at first, and I was surprised to see the inclusion of the ‘real’ world in what is otherwise a story so fully settled in its own world. It still seems strange, on reflection, because that is the only bit of inter-dimensional magic in the book – or in any of the sequels, from what I gather – and surely travelling between worlds would garner more comment, one would expect? Apparently not. Perhaps this is Sophie’s pragmatism, it is instead a slight shock but generally taken in stride along with everything else strange which has happened to her.

This was a minor niggle, however, and certainly did not prevent me from enjoying the book. I finished it and wanted more, immediately researching the sequels (although whether I read them or not is another matter, as they seem to follow largely different characters with Sophie et al relegated to supporting roles), and then curled up to watch the film again for the first time in a few years. It was the sort of book that I came out of feeling happy, warm, and thoroughly relaxed.

Rating: 5/5 – I knew I would enjoy the book, but I wasn’t expecting it to feel like a familiar favourite right from the start. That was wonderful.

Living my best life.
I've been working on this book for far too long, but this glorious sunshiny week where it's too hot to be indoors is the perfect time to push to finish it!
I am a big fan of @badmachinery - in particular the Tackleford chronicles - so I was delighted to get my hands on the latest story starring wunderkind Charlotte Grote, doing what she does best: solving crimes and being sassy.
Dresden? I hardly knew 'im!
Happy pub day to @calamitysusannah - THIS FRAGILE EARTH lands 24th June!
I've spent ages working up to reading this because it's a BEAST (626 pages!) But an impromptu week's holiday in the blazing sunshine is perfect for parking myself at the end of the garden and digging in.