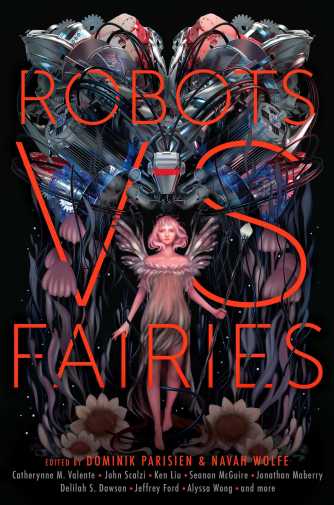 A unique anthology of all-new stories that challenges authors to throw down the gauntlet in an epic genre battle and demands an answer to the age-old question: Who is more awesome—robots or fairies?

Rampaging robots! Tricksy fairies! Facing off for the first time in an epic genre death match!

People love pitting two awesome things against each other. Robots vs. Fairies is an anthology that pitches genre against genre, science fiction against fantasy, through an epic battle of two icons.

On one side, robots continue to be the classic sci-fi phenomenon in literature and media, from Asimov to WALL-E, from Philip K. Dick to Terminator. On the other, fairies are the beloved icons and unquestionable rulers of fantastic fiction, from Tinkerbell to Tam Lin, from True Blood to Once Upon a Time. Both have proven to be infinitely fun, flexible, and challenging. But when you pit them against each other, which side will triumph as the greatest genre symbol of all time?

There can only be one…or can there?

In general, I don’t tend to gravitate towards short story collections. I’m not good at dipping in and out of books, I prefer to read them straight through, and the staccato effect that comes from constantly changing the narrative feels like hard work. That’s just the way my brain works, I think – I like a consistent narrative. But when this was suggested for my book group (which never happened, because trying to organise four busy people across three time zones is frankly impossible), the title alone was enough to get me interested.

When I started the book, I was unsure what the premise was entirely. I knew that authors had to pledge their allegiance to a team – robots or fairies – but my assumption then was that the stories presented would be specifically designed to promote a side as ‘good’. In fact, the premise was perhaps which team was the most interesting, but for a brief while it did seem like robots were making a very poor show of convincing me they were nicer.

There was a lot of overlap too, in the stories. Most of them took themes or tropes or references from the other team – the first story talks about fairies who also make robots, another is a robot version of Pinocchio, with a drone-line Blue Fairy. Some were straight sci-fi, others straight fantasy, but most had nods to their opponents woven into the narrative.

Perhaps one issue I have with short story collections is that you lose the consistency of narrative style as much as the continuity of story, and some authors just won’t mesh with you. Some stories I loved – the one about the librarian was wonderful, as was the one about the fairy and the Boy – but I actually couldn’t finish the last two stories in the collection. The first of these two was a retelling of The Tempest which is a play I loathe, and I found the narrative style hard to process as it was designed to imply a certain level of understanding which I didn’t have – this was clearly intentional, but I found it baffling. The very last work in the collection didn’t grip me either, written as a script it described a literal grudge match between Robots and Fairies, a Battle Royale for the ages. I found it hard to read, with huge blocks of speech quite a slog to get through. This is personal taste, but I felt it was a shame that the last two stories in an otherwise fairly consistent anthology were not the easiest to read – it would have been nice for it to go out with a bang.

I also think that perhaps short story collections are not best read in ebook format – it makes it hard to flick through, to re-find information on what you’ve read, and to get a sense for how everything slots together. Perhaps this was my mistake.

By and large though, whilst the stories were good, nothing really captured my imagination or blew me away – and I don’t think this is the fault of the authors, but more my own tendency to need longer to bed into a narrative and characters, and also the way my brain I think becomes oversaturated when faced with multiple new, short narratives in one go. There are some excellent authors here, and there are some nice stories, but I think by the end of the book my brain was just… done. But if you like short story formats, then I would recommend this. It’s a lot of fun, and has a lot to say.

The most beautiful book post arrived this morning!! Thank you @panda_lane #TheAbsoluteBook
I treated myself to the hardcover of Wundersmith after my hardcover of Hollowpox arrived and I discovered that they're WORKS OF ART.
I loved this book, it was so powerful! The sequel has gone right on my wishlist.
Lazy Sundays.
This was a lovely relaxing little book to read over Christmas. I wish there'd been a little more about the dresses, but it was still really relaxing!
One of my very favourite places to be.