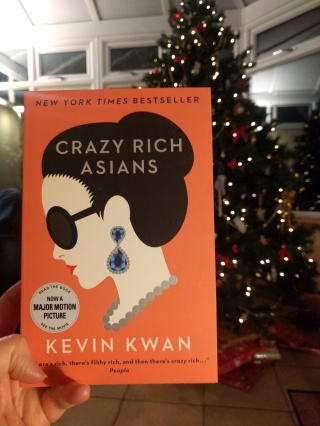 When Rachel Chu agrees to spend the summer in Singapore with her boyfriend, Nicholas Young, she envisions a humble family home and quality time with the man she hopes to marry. But Nick has failed to give his girlfriend a few key details. One, that his childhood home looks like a palace; two, that he grew up riding in more private planes than cars; and three, that he just happens to be the country’s most eligible bachelor.

On Nick’s arm, Rachel may as well have a target on her back the second she steps off the plane, and soon, her relaxed vacation turns into an obstacle course of old money, new money, nosy relatives, and scheming social climbers.

Like about half the planet, I went to see Crazy Rich Asians last summer, and was utterly swept away in the glitz, glam and nonsense. It was so delightfully shameless, bright and glossy, I just wanted to luxuriate in it forever. I never wanted to leave the narrative. So it was with some delight when I unwrapped my Christmas present to find the book.

I realise there are probably several releases with the movie poster on now, but I have never really been a fan of movie tie-in editions of books, so have made it a point to try and get the original covers. My husband knows me well, and I was delighted to get this cover because I love it. The style of the series is so recognisable, simple and elegant. They’re perfect.

The balance of the story is different in the novel from the film – the film sets up Eleanor Young as the matriarch, putting the balance of power firmly in her court. In the book, you get far more sense of her as an outsider and of the acceptance she has struggled to find with her in-laws. Instead you focus on Eleanor’s fears about Rachel, perpetuated by misinformation and misunderstandings, but also on Astrid and her family, who are at least as rich as the Youngs, if not more so.

It took me a while to settle into it to begin with, because it is third-person, omniscient narrator which I see so rarely in modern fiction. It caught me by surprise to find the perspective jumping around so much – I’m used to it happening between scenes or chapters, but not usually within a scene. Once I got used to it however, it added a fantastic dynamic and was perfect for showcasing the full-on, whole-family chaos that into which Rachel finds herself thrust.

Each character develops more over the novel, and different storylines are given priority in the film. Some characters benefit from this further characterisation, some… suffer. Colin and Araminta are somewhat less flattered by extended screen time. Oliver actually gets less time in the book, and we see a totally different side of Eleanor. Her friends are seen as ‘common’, she is seen as highly strung and demanding, irrational and judgemental, rather than cool and controlled as she is in the film. Eddie Leong also gets a significantly bigger role, and definitely not for the better. He’s mentioned mostly as a humorous side-joke in the film, whilst in the book he is shown as a tyrant, obsessed with fashion and money, and the way he treats his children and wife could be potentially triggering – I was pretty shocked, considering he was a side character, and the downside of this is that it never gets fully addressed either.

It makes for an interesting dynamic, and sadly Eleanor doesn’t get her redemption arc as she does in the film. At least, not in this book. Rachel and Eleanor actually barely spend any time together, and instead Rachel runs the gauntlet of extended family and friends who have their own vested interests in seeing Nick tethered elsewhere. It’s a little less satisfying as a resolution, however there are two more books, so I’ve no doubt the show-down comes soon.

The approach to wealth is very different in the book too, and privacy. In the film, the Youngs are well-known and their money is tied to a family business. In the book, the Youngs are old money, with no set business, and no-one has heard of them. Colin is the star of the show instead, and even Peik Lin has no idea who Nick is, but when she drops Rachel off at his Grandmother’s estate she knows they are rich. The film seems to create the split of Tacky Ways To Spend Money, as evidenced by the nouveau riche (i.e. Peik Lin’s family), and Classy Ways To Spend Money, embraced by the Singaporean aristocracy (i.e. Nick’s family and their friends), but the book seems to have a different ideology. There is Tacky Spending (still Peik Lin’s family, but also Eddie Leong and Bernard, he of the Stag Party planning), Classy Spending (Astrid Leong and Charlie Wu), and Too Rich To Spend (The Youngs and the remaining Leongs). A point is made about how, whilst the Youngs and Leongs spend money on real estate, they tend to re-wear outfits rather than constantly splurging, and avoid media attention. Astrid’s fashion habits are noted as unusual, but we see they are sparked by a teenage relationship with comparative new-money Charlie Wu. There is definitely a discussion to be had about comparative wealth vs attitudes to spending, and what some would say are ‘miserly’ attitudes amongst the older families – although they cannot be called truly miserly in reality, only comparatively in behaviours.

Other details were changed from the book, although whether that was for a more North American audience I am unsure. For example, the guards at Nick’s grandmother’s house are Gurkhas, which is far more significant than just having them as nameless guards. In the UK in particular that would have been an extremely meaningful detail, but I wonder if it lacks the impact further west. Certainly in the UK, knowing that a woman had been given a lifetime honour guard of Gurkhas would have made people sit up and take notice.

A lot of criticism was bandied around over the film’s lack of diversity within its Asian cast, focusing more on specifically Chinese Asians than the rich diaspora of cultures which makes up Singapore, aside from a number of mentions of the variety of foods available. This is probably a fair point, but I felt neither the film or book tried to be about anything other than Chinese culture – and in particular very Anglicised Chinese culture – so perhaps it is merely the title that is misleading. I definitely feel that the book to a greater extent than the film could open up some discussions about the impact of colonialism on existing cultures. There is some of this in the film, but in the book there are a lot of wry asides about how the younger generation were made to attend Christian schools and churches, even though the family religion was Buddism or Taoism, because this was seen as the only way to improve your status amongst the upper echelons of society. That is definitely a much longer essay, though, and one I’m sure other people with more qualifications would be able to examine it more thoughtfully.

In general, though, I really enjoyed the book. It had all the excess and glamour of the film, and I wanted to spend more time there. I’d definitely like to get the rest of the books in the series, and I hope that there will be further adaptations.

Rating: 5/5 – I honestly would read it again right now, and it just made me want to rewatch the film. It ticked all my boxes.