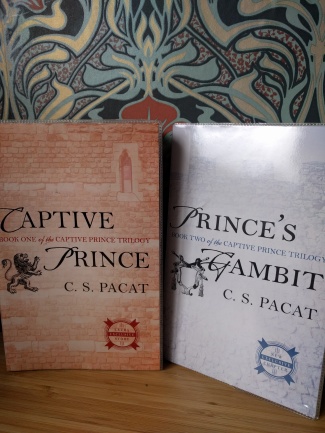 Much like The Long Way to a Small, Angry Planet, The Captive Prince trilogy was a series surrounded by a lot of hype. Unlike Small, Angry Planet, this came to me entirely through word-of-mouth recommendations. Also, much like Small, Angry Planet, this series began online, self-published through livejournal, and attracting many fans before it was given a traditional publishing contract. It is… ostensibly fantasy, but there is no actual fantasy in it, except that it is set in somewhere other than historical Earth. So, it reads almost more like historical fiction – if history had ever pitted Sparta and Renaissance Italy against each other.

The two kingdoms of Vere and Akielos have been in an uneasy truce since the battle of Marlas six years previously, when the King of Vere was killed, and his heir, the crown prince, was beaten in single combat by Prince Damianos of Akielos, leaving the younger son, 14-year-old Prince Laurent, in the care of his uncle, ruling as Regent until Laurent reaches 21. The novels start with the death of the king of Akielos, and Damianos being attacked in his rooms, before being drugged and sold as a slave to Vere. Akielos is told the king and prince are dead, and his half brother, Kastor, assumes the throne.

Damianos – Damen – is presented as a gift to Laurent, now 20. He wakes from his journey to find himself deep in the palace of Vere’s capital, in the power of a selfish, arrogant and cruel master, and desperate to get home. The novels follow the developing relationship between Damen and Laurent, and the growing understanding and – eventually – affection, as they navigate the political dangers preventing them from their thrones.

I read the three books, and the short story set afterwards:

The first book is very short, and I blitzed through it in two sittings. When I finished it, I felt like the series had been… significantly overhyped. There were some elements that I found very problematic in this first instalment, and things which could definitely be triggering for some people. Trigger Warnings: rape, sexual assault, paedophilia, physical assault, voyeurism, drugs, slavery.

The Captive Prince is set entirely in the palace at Arles, and shows Damen trying to adjust to the social and political maneuverings which seem so unnatural to his straightforward culture. There is continual comparison between Akielos – which has slaves – and Vere, which uses a Master-Pet system. Damen continually talks about how slaves in Akielos are trained to be submissive, take pleasure from serving, and are cared for and revered. In Vere, the master and pet relationship is a business arrangement – masters pay for a pet’s contract, for a fixed length of time, in return for service, mostly of a sexual nature.

This was. Difficult for me. The Master-Pet dynamic clearly had some BDSM flavouring, however there wasn’t much sign of the aftercare or trust required for that to feel comfortable. It was obviously meant to show the hedonistic nature of the Veretian court, of excess and sex, and show why Damen misunderstands Laurent’s nature to begin with. But for me it felt very uncomfortably handled, particularly as the positive comparison was actual slavery. There were allusions to the dangers of this, one actual scene of sexual assault, and a few near-misses, but there seemed to be very little to show the fallout of this, the repercussions. The narrative is easy to read, and very lightly-done, but I felt that didn’t do the subject matter the justice it needed.

I also think The Captive Prince is perhaps not well-matched with the later books. The triggering issues were largely front-loaded into this book, and the later two are much less difficult. It means it feels unevenly weighted, and can perhaps make the whole series inaccessible to people with triggers because the backstory is crammed around a book that has a lot of physical and sexual violence.

Prince’s Gambit and Kings Rising are much more focused on developing Laurent as a character, and his relationship with Damen as he learns more about him. Damen very quickly begins to fall for Laurent, and this brings in the additional peril of how Laurent will react when he discovers that Damen killed his brother, and is the prince of his mortal enemy, Akielos. Whilst there are still allusions to rape, and the continued talk of sexual abuse of young boys, this drops significantly in the second two books. The issue of slavery is developed across the latter books, particularly as a result of Damen’s experience.

I had only been able to get the first two books from my local library, and I finished the second on Boxing Day, and then, after some flip-flopping, I bought the ebook of Kings Rising. When I had finished The Captive Prince, I hadn’t anticipated wanting to read more so soon, however Prince’s Gambit was a much better book, both in terms of plot and subject matter. I found Kings Rising to be on a par with Prince’s Gambit, although the political machinations became even more convoluted than I anticipated, and I found that a little stressful towards the end. I also feel like The Summer Palace should have been included in Kings Rising as an epilogue, because the actual ending feels too abrupt for my liking, and The Summer Palace finishes the series well.

Rating: 4/5 – the start is not as strong as the later books, but provided you are aware of the triggers, or do not have any, it is excellent holiday reading.

2 thoughts on “REVIEW: The Captive Prince trilogy (and a bit) – C.S. Pascat”