UK Publisher: Self Made Hero

I love graphic novels, and I love films, so the minute I heard about this book it set off all the alerts my brain in that I had to read it, and do so as soon as possible. I was expecting something very personal, rather like Lucy Knisley’s books, where Ross would discuss his love for films in relation to his life. A more conversational narrative, something engaging and endearing. That is not what I got.

Filmish is an academic comic. You read that right – academic comic. It’s in depth and insightful, and academically rigorous with an extensive list of citations and references to back up all of Ross’ claims about film theory. It was about as far as possible from what I expected, but it was really quite fascinating and enjoyable to read.

Part of the reason I had expected this to be a personal book is because Ross himself is a character, his illustrated counterpart leading you through the book, occasionally in the guise of characters from the films he is discussing. The cover is a big self-portrait of Ross surrounded by iconic images from popular films from the history of cinema, from Meliés to Star Wars, Charlie Chaplin to John Wayne. I expected this to be a love letter to popular cinema in the way Hadley Freeman expounded on 80s teen movies in her book Life Moves Pretty Fast. Freeman’s book is supported with evidence and citations, but it is much more about the social impact as she perceives it, rather than addressing repeated themes or film theory.

This isn’t to say the book isn’t enjoyable, but it’s not the light hearted nostalgic romp that perhaps the cover led me to believe. Ross structures Filmish like an academic thesis, with each chapter focusing on a different element of cinematography and screen narrative that interests him:

THE EYE: The opening chapter of Filmish offers an eye-opening introduction to the history of cinema, exploring the tension between the idea that film can reveal the world to us anew, and the competing belief that the movies are an illusion designed to trick the eye. From A Trip to the Moon (1902) to Do The Right Thing (1989) and beyond, The Eye is a fascinating introduction to the evolution of cinema, and a thought-provoking insight into how the movies influence how we see the world.

THE BODY: In The Body, Ross examines cinema’s ongoing fascination with the human form, from the role of an actor’s bodily performance in constructing enduring characters to the problematic relationship mainstream cinema has with gender, race and disability. From The Passion of Joan of Arc (1927) to The Fly(1986) this chapter explores the cinematic body in all its glory and all its horror.

SETS AND ARCHITECTURE: From the earliest days of cinema, the movies have offered us a way to see the world around us differently. In this compelling chapter, Filmish explores the places and spaces that make our most beloved movies so memorable. Exploring everything from the industrial hell of Metropolis (1927) to the mind-bending dreamscapes of Inception (2010), Sets and Architecture takes us on an amazing journey through cinematic space.

TIME: An intangible and inescapable feature of life, time is a theme at the heart of many of cinema’s most thought provoking movies. In Time, Ross examines the effects of editing and pacing on storytelling, investigating the expressive, incendiary editing of Battleship Potemkin (1925) and the impressive and enthralling one-shot masterpiece Russian Ark (2002). From La Jetée (1962) to Memento (2000), the chapter also explores our personal relationship with time, and the role cinema has in allowing us to reflect on our pasts, presents and possible futures.

VOICE AND LANGUAGE: Ever since sound first graced the screen, the movies have been fascinated by the power of the human voice. In this chapter, Filmish looks into the complex role that the human voice plays on film, from song and dance of Singin’ In The Rain (1952) to the demonic rasps of The Exorcist (1973). Going further, the chapter looks at the ways in which film acts as a language by spreading ideas through cinematic form rather than words.

POWER AND IDEOLOGY: More than mere entertainment, the movies are a medium that play a crucial role in influencing how we look at the world. In Power and Ideology, Ross investigates the power of cinema to influence our behaviour and impact our attitude towards the world around us. From the power of military propaganda to the danger of Disney movies, this chapter will make you think twice if you think “it’s only a movie!”.

TECHNOLOGY AND TECHNOPHOBIA: A medium that emerged from the technological innovations of the 19th century, the movies are nonetheless a thoroughly technophobic medium. A chapter overrun with rampaging robots, malevolent AI and nuclear monstrosities, Technology and Technophobia discusses the ways in which film has reflected our anxieties about scientific and technological change back at us. Taking a journey through Modern Times (1936) to Jurassic Park (1993) and beyond, the chapter closes with an eye towards the future of cinema itself.

You’ll note from these summaries that the cover does another disservice to the book as well. The image on the front shows iconic films, well-known Hollywood classics – Modern Times, Aliens, Star Wars, The Searchers, A Clockwork Orange, The Wizard of Oz. This suggests a focus on Western, specifically American cinema, but this is not the case. The scope expands to include foreign language films, independent films, and includes discussions on cinema culture in Iran and Nigeria amongst others, whilst considering the social messages which are inherent within Hollywood in contrast to the implications of censorship both in Hollywood and other countries’ film production.

The images in this are almost secondary to the words – unlike other graphic novels, such as Lucy Knisley’s non-fiction journalistic ones which have a scrapbook feel amongst actual narrative comics, in this the images are irrelevant to each other. Whilst Something New provided a mix of shorter strips with direct address to the audience from Knisley’s avatar, in Filmish it’s almost like we’re in a lecture, and the art of the book is Ross’ powerpoint presentation to illustrate and support his point. That doesn’t mean they’re not important, they’re beautiful and Self Made Hero have produced a gorgeous book which really feels nice to hold, and the quality of the image print is excellent, but it made for a strange reading experience because at times I had to remind myself to pause and study the images because I was swept up in the information I was being given. 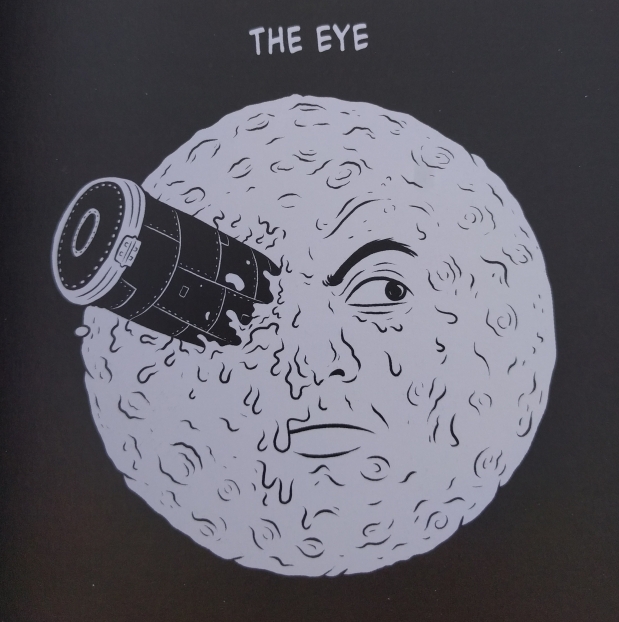 I went into this book expecting to be left with a warm flush of nostalgia and instead I came out having learned a lot. I’ve watched a lot of film, across a broad swathe of genres and languages – I worked at Blockbuster for two years, on ten free rentals a week, I’ve watched a lot of films – so I didn’t expect a mass market graphic novel to teach me anything new, even though I’m not hubristic enough to say I know every film ever, a book with such iconic, well-known images on the cover doesn’t suggest it will be treading outside well-travelled waters. But it did – it related films I knew to films I’d never heard of, indie films and alternative European cinema. I spent as much time reading the book as I did googling the films I hadn’t heard of.

It was an unexpected delight of discovery, and I fully recommend it.

Rating: 5/5 – It was not what I expected, but it gave me something else quite delightful and challenging instead. It’s a beautiful product.