If you have spent any time on the internet of late, you will have probably heard of the phrase ‘trigger warnings’. There are a lot of strong feelings about them, some of these feelings are negative, and there is a lot of talk about ‘millenial snowflakes’ etc etc.

In case, somehow, you haven’t come across the phrase, allow me to explain. A ‘trigger’ is something which usually (but not always) relates to a trauma someone has suffered, and which is psychologically linked to that trauma. Exposure to a trigger can cause a number of involuntary psychological reactions, including panic attacks, flashbacks and disassociative episodes. Whilst anything can be a trigger (warning for discussion of rape), there are scenarios which are more universally triggering – such as depictions of sexual assault, or physical abuse, or psychological torture.

There is a common misunderstanding of the word ‘trigger’ in this sense – people often use it sarcastically, or to simply describe something which makes them uncomfortable, which is part of the reason trigger warnings are seen as unnecessary coddling.

I feel a more useful comparison would be to allergies. If something is a common allergen – nuts, for example, or shellfish – even if there are only trace elements of the item in a product, a warning is placed on the packaging, just in case. Even if nuts are handled in a totally different part of the factory from where the chocolate bar is made, a warning is still placed on the label. Just in case. Allergies can be triggered by anything, but common allergens, which cause involuntary physical reactions, are always warned for.

So why aren’t triggers handled in the same way?

Some of the arguments against trigger warnings are that they create an opportunity for trauma victims to avoid dealing with their psychological issues, instead of working through them to recover. Alternatively, however, trigger warnings can act as a way for victims to prepare themselves for something which could impact on them psychologically. Many people I have spoken to are able to deal with traumatic material as long as they are warned about it first – it gives them time to prepare, and expose themselves to it in their own time.

I am not allergic to nuts or shellfish, but I can fully understand why other people need to be warned. I don’t have epilepsy, but I agree that warnings should be in place for strobe effects.

I don’t have any triggers, I am very lucky; but I can see why people wouldn’t want to read a graphic rape scene. To find themselves fully immersed in a detailed assault.

Reading is very personal, immersive and a deeply psychological experience. Imagine, then, finding yourself suddenly and unexpectedly embroiled in a scene depicting something traumatic for you.

So why hasn’t something similar been applied to books? It wouldn’t be unheard of – some manga are age-rated: Gantz, for example, and Spice and Wolf were 18-rated titles, the former for nudity and extreme violence, the latter for nudity and sex. They looked completely different, without those ratings it was unlikely that anyone would have considered Spice and Wolf anything other than a cute story given the art style. But these ratings are not legally binding, and are at the discretion of the publisher and the bookseller. Different publishers will have different rating requirements, and different booksellers will have different policies. When I was a bookseller, the 18-rated titles were wrapped in clear cellophane, so people could not flick through, they were kept out of reach of younger customers, and we asked for ID for anyone buying them. I have been to bookstores where they are shelved unwrapped and filed in alphabetically, rather than giving consideration to the age of the reader.

One argument could be that these warnings contain spoilers, but this never seems to be a problem with age ratings for films, which give a brief, generic summary of why it has received the rating: 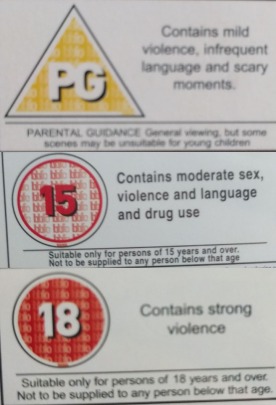 Trigger warnings are also common in fan fiction. One of the biggest fanwork sites, Archive Of Our Own, has a set of archive warnings for common triggers, alongside its rating system. If a work selects to warn for these, these triggers are displayed in bold at the beginning of the tags, so people can identify easily whether it contains content they would rather avoid.

These warnings are seen as very valuable within fan culture, and can help people with triggers easily navigate and curate their experience in a way which is less harmful to them. Being notified of a work’s triggers doesn’t prevent someone from enjoying the story.

For a while, Gollancz had a tick list on the back covers on some of their books, giving a brief run down of what was in the work. This was broadly a marketing gimmick, and has been removed from reprints. But the point is that they were there, on published books.

Including trigger warnings could easily be done. Books are already broadly ‘rated’ by the target audience – children’s, teen, young adult, adult – so adding further content warnings could easily be done, in a small section on the cover, or perhaps inside the back cover. This would make comparatively little difference to readers without triggers, and be only a small bit of extra work within the cover design. It would simply take a little cross-format thinking to apply it to books in the same way it is to films, games, and transformative works.

One thought on “BLOG: Trigger Warnings”