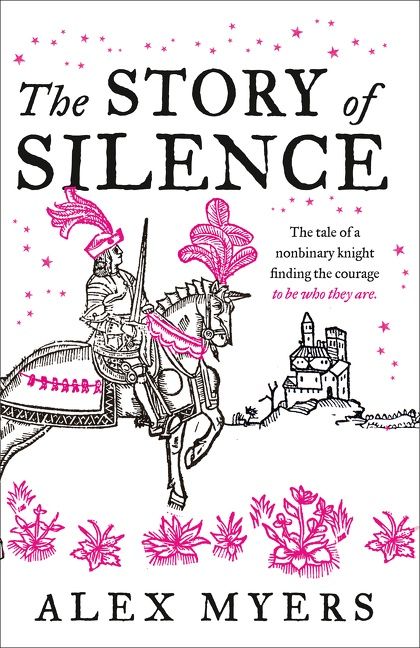 A knightly fairy tale of royalty and dragons, of midwives with secrets and dashing strangers in dark inns. Taking the original French legend as his starting point, The Story of Silence is a rich, multilayered new story for today’s world – sure to delight fans of Uprooted and The Bear and the Nightingale.

There was once, long ago, a foolish king who decreed that women should not, and would not, inherit. Thus when a girl-child was born to Lord Cador – Merlin-enchanted fighter of dragons and Earl of Cornwall – he secreted her away: to be raised a boy so that the family land and honour would remain intact.

That child’s name was Silence.

Silence must find their own place in a medieval world that is determined to place the many restrictions of gender and class upon them. With dreams of knighthood and a lonely heart to answer, Silence sets out to define themselves.

Soon their silence will be ended.

This took me longer to read than I anticipated. I hadn’t initially planned on requesting it, as I’ll be honest I’ve never entirely been super excited about Arthurian stories. However, I’m also a person who has read enough wishlists for “knight comes to rescue the princess, but the knight is also a princess” that when I spotted that I thought I would give it a go. What I got was so much more thoughtful and nuanced than I expected, and it took me a while to read because it encouraged a slow and considered read.

The giveaway, really, should have been the careful use of pronouns in the blurb. The author, Alex Myers, is a trans man himself, a trans advocate and a gender identity educator. It is no surprise he was drawn to this story, Le Roman de Silence, which dates back to the 13th Century and is part of the later Arthurian catalogue. But Myers took the story and developed it into an examination of the way societal expectations of gender can influence a person’s self-identity.

I struggled to settled into the book a little because it uses the format of a story-within-a-story. Silence presents themself at an inn, and is cajoled into sharing their story with the minstrel there. As this is Arthurian, not only do we get the introduction to this little scene, but also the backstory of the creation of the law preventing women from inheriting land, and of Silence’s father’s greatest adventure. I was a third of the way through the book before Silence had started to reach puberty, which meant that it was a while before I got to know Silence and was able to build a relationship with the character fully.

I felt the story really got going when Silence was old enough to decide he wanted to become a knight and started trying to train for it while he lived in solitude with his father’s cousin Griselle and the seneschal of his father’s hunting lodge. At that point Silence became less of a plot point for me and more of a character with real wants and desires, and the temperament to strive for them. The sort of character I love – one who is competent, works hard, and achieves their goals.

As you would expect, Myers adds far more depth to the story and the issues of gender identity than in the original. Removing the discussions between personifications of Nature and Nuture, he instead focuses on the dysphoria that comes from believing yourself to be one thing and finding you are instead another. When Silence is told he is, in fact, a girl, but must continue to live as a boy, it begins a constant internal struggle where Silence feels he has to battle his body and his nature to be who he really is. This is not helped by the constant barrage of gender stereotypes flung around him. He is told women are disloyal, lustful, feeble of mind, body and spirit, meek and incurious. Being as he is surrounded mostly by men, and the laws and traditions of the land support this view, this is a version of womanhood he can never relate to or identify with. He cannot be female, because he is none of these things. Meanwhile he is told by those who know his birth gender than he cannot truly be male either, because women are incapable of the physical feats required of a knight, and lack the strength of character. And just as he thinks he can deny his physical body, he is presented with an unpleasant reminder in the form of every uterus-carrier’s least-favourite friend, Aunt Flo.

As someone who is cisgendered, I found that rhetoric exhausting and demoralising to read, and it wasn’t impacting my sense of self or my own dreams. Being a woman in those days would have been exhausting enough, surrounded by such opinions held as fact. Silence’s experience, however, is sadly probably not unlike that faced by many trans people today. He is constantly told he is unnatural, that his existence is a sin, and that he cannot truly be a man because his nature does not allow it. This creates a constant inner battle against guilt for his own existence, for some sin he is perceived to be committing, and a hatred of the circumstances of his own birth. He’s constantly afraid he will be discovered and forced into the wrong gender, and that develops into a loathing of his own body and skin. I found this very emotive and I can only imagine that it will be even more so for anyone who identifies as trans.

Myers’ use of pronouns throughout is as respectful and pitch-perfect as you would expect. In fact, a key point of character development occurs as the pronouns change, and it is a wonderful and telling moment, and a very powerful narrative technique. This is followed up by Silence providing the ending to their story, and the minstrel decides to edit it to make it more palatable for his audiences. Myers then gives us a second ending, the minstrel’s ending, which is the original ending for the story. When put next to the character nuance that Myers has given us for Silence, and the depth of the story, this ending comes as a shock, and feels uncomfortable. It feels almost violent when compared to the true ending that Silence provided, despite it being the more traditional and expected ending. It is, perhaps, ‘neater’ in terms of traditional folktales, but it is shocking as an ending for the way the story has developed. It’s a masterful twist that makes the reader question their preconceptions of story structure and also gender politics within stories, even traditional folktales.

Rating: 5/5 – this book was a fantastic example of how tropes can be made fresh simply by examining them from a different angle. While very little in the plot of the story differed from the source material, Myers adjusted the perspective, dived deeper, and presented something that builds up to subvert all expectations in the ending.

One thought on “REVIEW: The Story of Silence – Alex Myers”