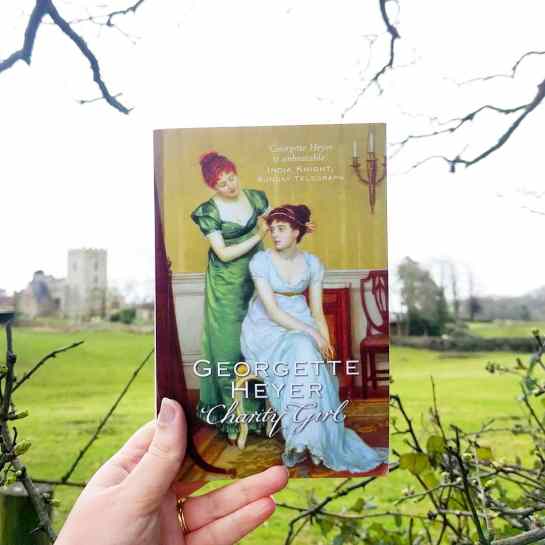 When Fate and a chivalrous impulse combine to saddle Viscount Desford with a friendless homeless waif named Cherry Steane, to whom else should he turn in such a scrape but his old childhood playmate, Henrietta Silverdale? For all they refused to oblige their parents by marrying, they have always been the best of friends. But as Desford pursues Cherry’s lickpenny grandfather and reprobate father around unfashionable watering places and the seedier fringes of society, Hetta is forced to wonder whether he might not, at last, have fallen in love. Without the timely intervention of his scapegrace brother Simon, and Hetta’s worthy suitor Gary Nethercott, Desford is in danger of making a rare mess of his affairs.

I’m very much in the mood for cuddly romantic books at the moment, or books which at least have a strong romantic subplot. Maybe it’s the weather, but whatever it is I’m enjoying something with a lot of love in it. So I did enjoy taking a bit of time out to re-read another entry in my Georgette Heyer collection, one I don’t read very often.

This one is slightly unusual for a Heyer book, in that the two people who meet by chance at the start of the book aren’t the two destined to fall in love, although Desford is taken by Cherry at the start. Instead, the love interests have known each other since childhood, and haven’t ever considered romance, despite the pressure from their families. I can’t think of another book where Heyer does this. Unfortunately, the nature of the plot is such that the two of them are rarely at the same place at the same time, and only think about each other in passing. Usually when someone else is being ridiculous, they think wistfully how much the other would enjoy this, but that’s about the sum of it. Instead, the plot is populated with a range of satirical characters and allows Heyer to stretch her sketches.

I’ve talked before about how Heyer manages chaos and larger-than-life characters, but I think they often work their best where they are part of the plot themselves. Here, though, it seems mostly like the plot is a vehicle for a series of different interactions with bizarre characters who cross our paths and then leave, never to be seen again. Around all that, it feels like you barely get any time to get the know the leads, and even less time to see their relationship build. Yes, they knew each other from childhood, but that doesn’t mean I wouldn’t like to see the nuances and changes in their relationship as they shift towards love. That can be a really fun dynamic, but isn’t really one that gets developed here.

I think perhaps a part of this is that the book is pretty short. It’s less than 250 pages, which doesn’t give time to really explore character development and resolve two separate narrative arcs, along with a third narrator added towards the end of the book. It made it a really nice bit of weekend reading because of its length, but it meant that, in reality, it wasn’t the most satisfying read I’ve had, which perhaps explains why it’s been so long since I picked it up. There’s nothing wrong with it, strictly speaking, but it just doesn’t quite deliver the punch I was wanting. Instead, the ending felt a little abrupt. There were little hints, but they were so low key and far between that you didn’t get time as a reader to really feel invested in the relationship.

It’s the similar problem to the one Persuasion faces. I found that book maddening because the whole premise of it means the two romantic leads barely speak for the entire book. For me to become invested in a romance I need to spend time seeing it build, but also seeing the characters interact. It’s as much about their chemistry as it is about the concept and prospect of romance. Without that interaction and without that chemistry, I can’t quite get into the story as much as I like.

That said, this is still a fun, easy read. It filled the romance gap, and if you like Regency romances, this is a solid entry into her catalogue. It does everything well, it just doesn’t do it in the way I wanted it to.

Rating: 3/5 – it passed the time, and is a good, easy read, but it’ll never be one of my favourites.