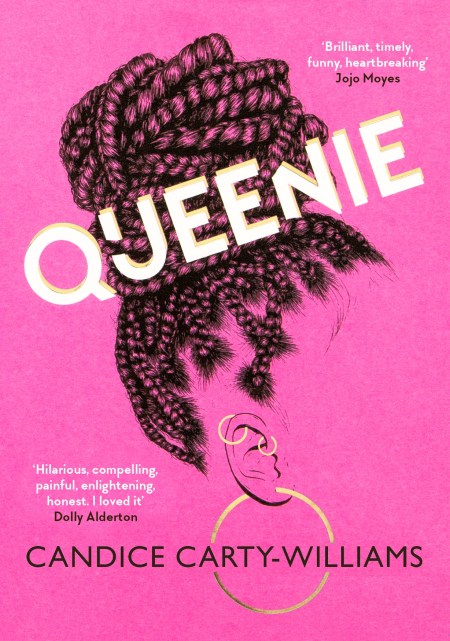 Queenie Jenkins can’t cut a break. Well, apart from the one from her long term boyfriend, Tom. That’s definitely just a break though. Definitely not a break up. Then there’s her boss who doesn’t seem to see her and her Caribbean family who don’t seem to listen (if it’s not Jesus or water rates, they’re not interested). She’s trying to fit in two worlds that don’t really understand her. It’s no wonder she’s struggling.

She was named to be queen of everything. So why is she finding it so hard to rule her own life?

Queenie is one of those books which has been hyped for months, so when it became available on NetGalley I couldn’t resist. I loved the cover, I loved the premise – and people I trusted were saying it was amazing. Where could I go wrong?

It’s not often a sure thing comes along in fiction, but I loved it. I blitzed through it in weekend. But it’s not an easy book. Yes, it has funny moments, and some of the characters are utterly delightful, but I actually found some of it quite painful and very sad. I would like to take a moment to note the trigger warnings I think should be noted for this book – dubious consent, sexual violence, self-destructive mental health issues, racism, and mentions of child abuse and body-shaming.

Anyone who has ever suffered from mental health issues will recognise very quickly what Queenie is going through, even as she denies it and buries it. Following the break-up with her long term boyfriend, we see her making progressively worse choices, caring less and less about herself, and letting men abuse her because she feels like she deserves it. This is before we even get into the racist microagressions which she faces continually – even through flashbacks to during her relationship, when she was happy – and as a reader it made me angry and sad and exhausted. A thousand tiny and not-so-tiny cuts each day, even when she should have been safe.

There were times reading this book that I felt very emotional. Perhaps that was what pushed my speed through it, I needed to know there would be a positive resolution. The first-person narration brought me so much closer to Queenie’s thought process that I’ve felt in other books with first-person narrators, and it seemed so vivid.

Also addressed was the stigma that comes with mental health disorders and seeking treatment. Specifically, the book looks at this stigma in the Caribbean-British community, and the sense of shame for the whole family that mental illness means. Queenie’s family are an interesting study – they clearly love her dearly and are set in their ways, but Queenie seems to feel detached from them, alienated. It seems that as much as anything else in the book, she struggles to marry her British identity to her Caribbean family, and that is another aspect of her life which she faces bullying about. She feels like she has to be strong and independent all the time, which means she struggles to rely on the people around her, which compounds her situation as it progresses. Isolation seems to be a key feature of Queenie’s life, and she seems to be torn between embracing it and fighting against it.

She’s not always a likeable character – often combative or defensive, irrational and irresponsible, but Queenie is always an empathetic character. As the book continues and some of her negative traits become more pronounced, it becomes clear they are also in some ways a symptom of her mental illness and the traumas. She is a strong-minded, passionate woman, with clear principles and a sense of right and wrong, but it becomes unfocused and jagged as she finds herself struggling to handle her illness. She misdirects a lot of it, instead of getting angry at the people who are really treating her poorly she seems to get angry at herself.

It’s very hard to review a book about a black woman’s struggles as a white woman with all its associated privileges. I don’t want to feel as thought I am making blanket statements and assumptions because I am unaware of the social and cultural nuances which come with Queenie’s experience. The book gives me insight into her personal thoughts, emotions, and experiences, but how they reflect those of another Caribbean-British person I couldn’t say.

What I can say is that this book has such a strong, clear voice. Queenie’s struggles are familiar to me from the perspective of her mental illness – they may be familiar to other readers from her social or cultural experiences. One thing I do know is that Queenie’s voice is out there and it will be heard, and I think it might help make some parts of the world a little gentler, whether it is readers being kinder to themselves, or to those around them.

Rating: 5/5 – There have only been two books which have ever made me cry, but Queenie came damn close a couple of times. It’s an honest and open book, and it’s something very special.