Every so often in your life, a story will come along which just fits so perfectly with what you need and want that you become wholly absorbed in it. It will become a bubble of relief from stress and help you through tougher times. You’ll feel happy when you’re part of it and strive for more. Avatar: The Last Airbender was one of those stories for me.

During a time when I was desperately unhappy in my job, anxious about planning my wedding, and dealing with ongoing health issues to boot, I stumbled across the series on one of the streaming services. My husband and I were both quickly sucked into it and feverishly worked our way through, torn between a need to consume as much as we could whilst trying to make it last as long as possible. It was a tricky balance, but honestly it was just the crutch we needed at that time in our lives (he was also working crappy part time jobs whilst trying to finish his PhD).

The Korra series was good, but it didn’t quite hit the same notes for me. I didn’t really care so much about these new characters – I wanted to know what happened to the characters I’d become so invested in, and see what happened to them. (It also didn’t help that the romantic drama between Korra and Mako was so dull. SO DULL. But the series pulled a blinder with the bait-and-switch on that ending and it was wonderful.) Mostly I spent the series wanting to just spend time with the children of the characters I’d loved, and the few of those who remained. There were questions that were never answered – what happened to Sokka? Who was the father of Toph’s children? What was Aang and Katara’s wedding like? Some of this wasn’t the fault of the series. It was plagued with budget issues, being moved to online-only availability for its final season, and losing two episodes from the funding altogether. But also I felt the structure of the series – four seasons, on fewer episodes than the original run? – meant that the story never was able to spend the time developing the narrative in the way the original did.

When the sequel comics were announced, I was cautiously curious. I’ve never been particularly interest in the comic media for other series (Buffy, Firefly – perhaps my issue is entirely Whedon-based?), but this was a series which had already been successfully expanded once, and the storylines were addressing questions which had been left unfinished. The art too, whilst not identical to the series, was extremely close style wise. Part of that I think is the difference allowable between animation (simple, bold lines, easy to animate) and print art (softer, more details allowed), but the dynamic element is still there – there’s a lot of bold movement and clear character momentum. Nothing is really lost in the transfer.

Initially released in three parts, the books are then collected into beautiful Library Editions, which are hardbound. The books are physically bigger than the individual parts, but the art remains the same size – instead we are given commentary from the authors in the white frames around the panels. The cover art for each part is reproduced as chapter breaks throughout the book, and at the back are character design notes and developmental sketches so you can see the process and thought put into each story.

The Library Editions are beautiful things, but they’re not cheap. At full price, when first released, they probably do cost slightly more than the individual parts, although if you are happy to wait the prices do drop (on online retailers at least) to something more affordable. They’re also not the most… transportable books, nor would I recommend them for, say, reading in bed. You could do some real damage dropping one of these on your face. If you have mobility and strength issues with your hands/arms/wrists, these probably aren’t ideal either because they’re huge, and they’re heavy. But on a shelf they’re gorgeous, and if you don’t plan to carry them around with you then they are lovely things to have. A lot of care has been put into ensuring these are premium products, and that’s evident when you hold them, from the robust finish down to the quality of the print and the paper. These are the coffee table books of graphic novels. 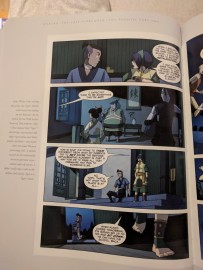 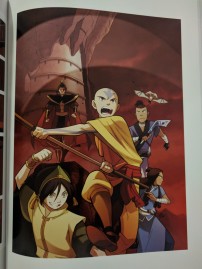 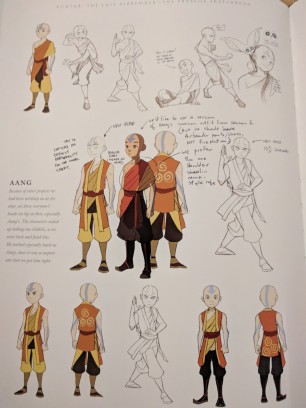 That said, the print is also bold, clear, and readable, and these books have been excellent for building confidence in the student I tutor with dyslexia. We initially read them together, but he is now confident enough to read them on his own as we tackle more difficult books together, like Alice’s Nightmare in Wonderland. He had previously tried to read graphic novels but with mixed success, as the Batman titles, or even Sandman, had quite small text that was difficult for him to parse. These books are readable, the typeface is large, clearly defined, spaced well both on the page generally and within speech bubbles, and it means that he has gained a measure of independence in his literacy for the first time in his life.

The stories themselves are what you would expect from a series taking the original writers and continuing a world that is so fully developed and realised. Without the overcoming villain of the series, the adventures fit the episodic nature of the books brilliantly, dealing robustly with individual conflicts and showing continued character growth without feeling like greater plot progression is being sacrificed. The Promise deals with Zuko’s concerns that he may turn into his father, whilst Aang tries to force the world back the way it was before, into separate nations, without considering the nuances of the blended families that were created during the occupation. For Aang, this is the time where he first really learns the practicalities of being the Avatar outside of conflict, and begins to realise that the world he knew has been lost for good, but that might not be a bad thing (whilst also giving a great and well-executed example of the issues with cultural appropriation). The Search continues Zuko’s personal development as they finally make a concerted effort to find what happened to his mother. Zuko and Azula’s relationship with each other and with their mother provides a lot of material. The Rift again pits Aang against progress as he tries to relive an old festival because “that’s what we’ve always done”, whilst it is impeded by technical and social progress. In this, Toph provides the foil to Aang’s development, as a character who has felt the brunt of tradition without reason her whole life.

Two further adventures have now been completed, Smoke and Shadows and North and South, whilst a sixth, Imbalance, has released part one, with part two due for release in May 2019. You don’t lose anything from the series if you choose not to read these, but they just add the perfect level of further development. I am always blown away by art which shows characters subtly ageing, and these books do it well. Aang slowly grows from child to lanky teen, and it’s incremental but there. The development of characters beyond the end of the series is wonderful, and it bridges the gap between The Last Airbender and Legend of Korra beautifully.

Rating: 5/5 – I love these books and this world, and look forward to getting them all.

Living my best life.
I've been working on this book for far too long, but this glorious sunshiny week where it's too hot to be indoors is the perfect time to push to finish it!
I am a big fan of @badmachinery - in particular the Tackleford chronicles - so I was delighted to get my hands on the latest story starring wunderkind Charlotte Grote, doing what she does best: solving crimes and being sassy.
Dresden? I hardly knew 'im!
Happy pub day to @calamitysusannah - THIS FRAGILE EARTH lands 24th June!
I've spent ages working up to reading this because it's a BEAST (626 pages!) But an impromptu week's holiday in the blazing sunshine is perfect for parking myself at the end of the garden and digging in.