As familiar to many Hogwarts students as Cinderella and Sleeping Beauty are to Muggle children, The Tales of Beedle the Bard is a collection of popular stories written for young wizards and witches.

Translated from the original runes by Hermione Granger, they include fascinating additional notes from Professor Albus Dumbledore, with intriguing glimpses into his life at Hogwarts, as well as illustrations from J.K. Rowling herself.

For wizarding and Muggle readers alike, this is a must-have edition, featuring fate-seeking witches, a hairy-hearted warlock and the tale of the three brothers who tried to cheat Death . . .

I will admit that in recent years my interest in Harry Potter has waned somewhat. I wasn’t a fan of the epilogue, and every new post-series announcement or development (Nagini is really a person? And what a mess the Ilvermorny stuff was! WTF is going on with the Cursed Child? Etc. etc.) has just added to my Potter-fatigue. Whilst I’ll maybe get excited about a cute new bit of original series merch, and yes just last night I made my Dad get sorted (he’s a Hufflepuff, like me), my interest in anything wider universe has basically shriveled and died.

This was a stocking filler for Christmas last year, amongst some other lovely books I got as presents, and it just sort of kept slipping down the list until the other weekend.

It’s actually quite a lovely book.

I know Bloomsbury have just released a new illustrated edition, done by Chris Riddell, but the illustrations in this small, paperback version are really rather wonderful as well, and really add something charming to this smaller edition. Each story has its own frontispiece and illustrations throughout, and then Dumbledore’s afterword for each story has a sketch of his study, with Fawkes standing watching. 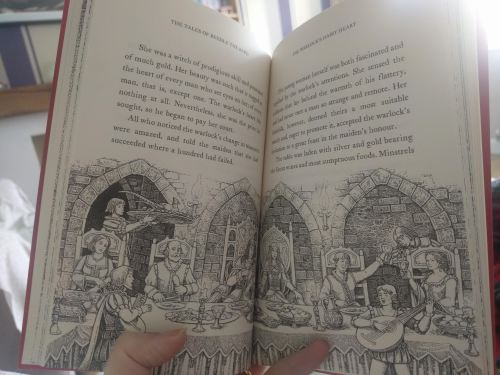 For me Rowling’s strength in the early Potter books was her sense of world building and whimsy – both of which fell apart as she has tried to expand the world without appropriate consideration for the practicalities. The Tales of Beedle the Bard isn’t impacted by any of this, as it is a book of fairy tales there is no need for practical considerations. Much like the Grimms’ tales are divorced from reality, so are these. 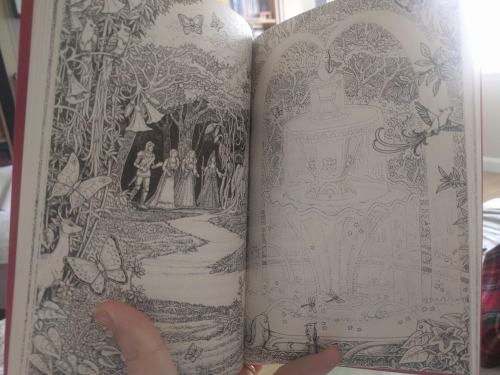 I really enjoyed the stories and I felt they worked wonderfully even without the context of the Harry Potter books – these could just be traditional fairy stories, enjoyed by people who have never read a single Potter. What I did find strange was the odd conceit of having Dumbledore provide a series of footnotes and an afterword to each story, which on its own would be fine, but the appearance was that Rowling herself was providing additional context footnotes alongside Dumbledore’s, as though Dumbledore himself was a real person. I suspect I have misunderstood, and what I read as Rowling’s notes were supposed to be Hermione’s, but I didn’t feel this was really clear enough. In other books Rowling has done in a similar vein, Hermione’s voice is usually much more distinct. 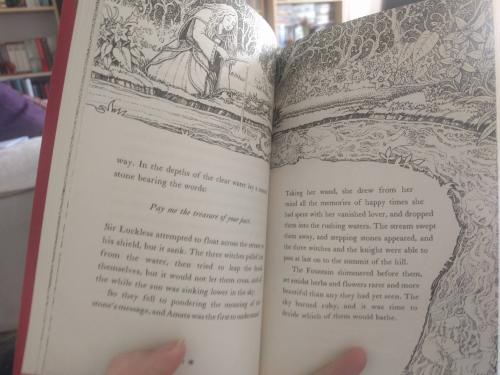 It’s hard to begrudge that as anything other than a minor niggle, however, when the stories themselves sit so well alongside the traditional classics in terms of tone and content. Additionally, all profits from this book go to the Lumos Foundation, which works to rehome orphaned children around the world, instead of having them in orphanages and institutions.

In that sense, for the price, it’s definitely money well spent and will make a lovely addition to your Potter collection, even if, like me, you’re pretending anything from the epilogue onwards didn’t happen.

Rating: 4/5 – I’d prefer more stories and less commentary, but for the price I can’t fault it.

5 thoughts on “REVIEW: The Tales of Beedle The Bard – J.K. Rowling”

There was an error retrieving images from Instagram. An attempt will be remade in a few minutes.