Back in 2015, I applied for a place on the UCL MA Publishing. I got an interview, and travelled all the way down to London, where I met Dr Melanie Ramdarshan-Bold and Professor Iain Stevenson.

It was the most positive interview experience I’ve ever had, and I came out of it feeling buoyed up and happy, and feeling like if I didn’t get onto the course it would still be a good day. I got an email with my offer three hours later.

By the time I started the course at the end of September 2016, Professor Stevenson had retired, although he returned to teach a session on the history of children’s books for one of my elective modules. He remembered me, and it was nice to see him again and thank him personally for letting me on the course.

A month later, he was tragically killed in a hit-and-run incident near his home.

The staff on the MA were shaken by this, and devastated. All of them had worked with him, he had founded the course, and shaped it into what it was – welcoming, supportive, and encouraging.

Professor Stevenson had started as a publisher himself, working for publishers including Macmillan and Wiley, as well as the long-defunct Leicester University Press – we had a long discussion about Leicester in my interview, comparing our time there and reminiscing about the city and the University.

He published several books, and founded Belhaven Press, an environmental imprint of Pinter Press, which was subsequently bought by Wiley. Professor Stevenson’s long connection with Wiley continued into his time at UCL – in 2008 he announced the start of an annual scholarship, funded by Wiley, for one student each year on the MA. 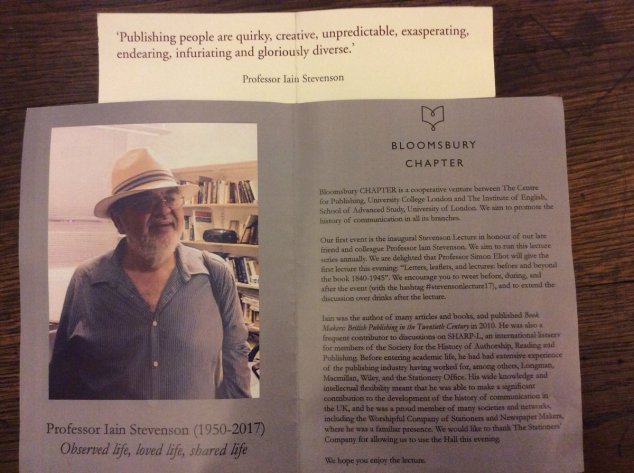 The lecture was arranged in conjunction with Bloomsbury CHAPTER and held at Stationers Hall. Given by Simon Eliot, the lecture was entitled “Letters, Leaflets, and Lectures: Before and Beyond the Book 1840-1945” which provided a fascinating cultural history of the UK, covering science, arts, employment and literature.  (This year’s lecture was given as part of a one day conference celebrating 175 years of Macmillan Publishing, and was given by poet Don Paterson) The setting was grand and impressive, all dark wood and crests – Stationers Hall is essentially the birthplace of British publishing, as I mentioned in my post looking at why most publishers are based in London.

At the end of the lecture, the first annual Stevenson Award for the MA Publishing was presented – to me.

I had never in my life been deemed award-worthy, had always considered myself middle-of-the-pack at best. I have talked before on various different platforms (I’m not certain if I have done so on this one) about how when I applied for the course I had only considered the worst that could happen – I’d be rejected, I’d fail. I had never in my life entertained the possibility that I would be achieving what I did. It meant so much more than perhaps anyone would realise.

I met Professor Stevenson only twice, but through his actions and his legacy he had a huge impact on my life. Because he started the course at UCL, I was able to apply. Because he and Mel accepted me on the course, I was able to attend. Because he had made the course what it was, I felt supported and cared for, and was able to achieve goals which I had been hesitant to set myself at the start of my studies. Because of his life and love for publishing, the award was created to honour him, and he managed to neatly book-end my time with UCL – the nod from him let me in, and I got another nod from him on my way out.

Professor Stevenson with the 2014 UCL MA Publishing cohort. From https://blogs.ucl.ac.uk/cfp-blog/2014/10/13/ma-publishing-treasure-hunt-winning-blog-post-lucy-broughton/

I think this is an attitude which can be found in the wider publishing industry, in the UK at least. There’s a culture of paying it forward, of helping people to get started, and of supporting colleagues in need. My experience with publishing has been almost universally welcoming and kind, and I think it’s true that kindness breeds more kindness. Every person in publishing who has helped someone else into the industry has created their own legacy, trickling down with each new publisher, each new success.

The Stevenson Award is presented in recognition of commitment to and passion for the publishing profession; community spirit; and entrepreneurial skill. I am passionate about publishing, and it’s a community I want to be a part of and to collaborate with. I’m just waiting for someone to give me the chance Professor Stevenson did.

3 thoughts on “BLOG: The Stevenson Award – Legacies in Publishing”