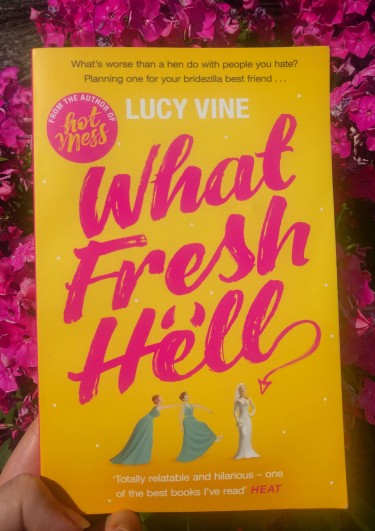 What do you get if you cross a dozen drunk hens with one shiny Butler in the Buff?

Meet Lilah Fox. She’s on the hen do from hell. Then she gets a message (44 of them, actually) from her best friend with big news: she’s getting married in six months. Oh, and Lilah’s her maid of honour. Which means she just got signed up for:

– A military schedule of wedding fairs and weekly planning meetings

– All the enforced, expensive fun you can imagine…

What fresh hell is this?

I have been a bridesmaid three times in my life, twice as an adult, and I have been on numerous hen nights – my own included – and have finally reached the point where I feel I can say I never want to go on another hen night in my life. The expense! The inconvenience! Having to share a room with someone I’ve never met before in my life, who keeps her phone on loud and gets Tinder alerts ALL NIGHT! No. Never again. No matter how much fun I have, I always end up exhausted, stressed and broke; and barring a couple of exceptions (and mine isn’t one of them) I never have enough fun to make up for that.

When I saw the premise for this book, I thought it would be a smash hit for me. The wedding industry is full on, balls-to-the-wall nonsense, so it is ripe for comedy and being torn to pieces.

In the end, though, I found myself a little lukewarm on it. I don’t think the issue is with the quality of the book, but more in the type of comedy I find funny. In general, I think I prefer grounded characters dealing with ridiculous situations, and deadpan delivery or understatement. This book tends more towards farce, with the characters all quite melodramatic and OTT, which made it difficult for me to sympathise with them, or see the comedy. Yes, this is a ridiculous situation they are in, but the ridiculous choices they’ve made have got them into it. Lilah spends the whole book unable to stand up for herself as everyone walks all over her, which I found frustrating, whilst the rest of the cast are caricatures – the instagram celeb, whose every move is calculated to increase her fame; the bridezilla who used to be rational but appears to have lost the plot; and the grandma who is so old she can and will get away with anything.

The book starts with Lilah on the hen night for a girl she hated in high school. Why? Why would anyone do that? Because additionally, none of the hen nights in this are actually nights – they’re all week long trips or weekend breaks. A week, with people you don’t like. Why? It’s established early on that Lilah has intense FOMO, and also wants to make sure people like her, which is why she has massively oversubscribed on weddings for the year, and the associated activities, leaving her boyfriend barely able to spend time with her and her bank balance battered. But I’m not sure even the worst FOMO would make me want to go on holiday with people who bullied me at school.

There are some really delightful bits in the book which appealed to my sense of humour – every couple of chapters there is a summary of the latest wedding Lilah has attended, which gives the location, theme, menu (identical for each), the gift given, and any additional gossip. These are exactly what I love, understated, deadpan comedy with a strong hint of irony. Other bits just fell flat though, such as Lilah’s recounting of a brawl which broke out at one wedding to a group of her grandmother’s friends being received only with horror that the bride wore a pink dress instead of white. This felt so false for me, particularly given that most people of the age group depicted would have likely got married in whatever colour was available at the time if they married during WWII, or during rationing afterwards.

Generally, I struggled to relate to the characters. Even the ones who were supposed to be quirky and endearing grated against me – perhaps more so than most, I found their behaviour and mannerisms very trying. I spent most of the book waiting for Lilah to explode with righteous fury, but even when she did that was underwhelming. Particularly because of an awkward semi-romantic plotline that appeared at the end with the guy from the council who had been the bane of Lilah’s life but who turned out to actually be cute and personable. And then her boyfriend who felt abandoned and left her but then turned up and decided to try and get back together? The plotlines with the potential romances could have been left out entirely to be honest, they had very little bearing on Lilah’s development, or the main plot. Also, a girl who became thin and pretty because she stopped eating after a breakup is a frustrating trope. Possibly because I never see the stories about the people who eat their body weight in biscuits when they’re at a low point, which is definitely what happens to me.

Rating: 3/5 – I wanted to enjoy it more than I did, but I think it’s a case of different senses of humour not quite meshing.

One thought on “REVIEW: What Fresh Hell – Lucy Vine”