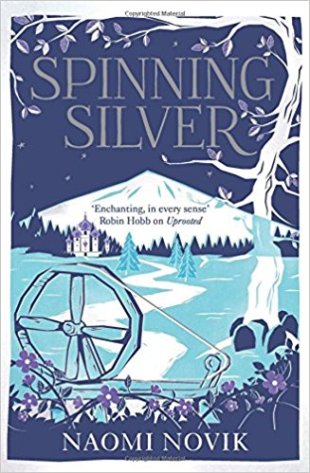 Miryem is the daughter and granddaughter of moneylenders, but her father’s too kind-hearted to collect his debts. They face poverty, until Miryem hardens her own heart and takes up his work in their village. Her success creates rumours she can turn silver into gold, which attract the fairy king of winter himself. He sets her an impossible challenge – and if she fails, she’ll die. Yet if she triumphs, it may mean a fate worse than death. And in her desperate efforts to succeed, Miryem unwittingly spins a web which draws in the unhappy daughter of a lord.

Irina’s father schemes to wed her to the tsar – he will pay any price to achieve this goal. However, the dashing tsar is not what he seems. And the secret he hides threatens to consume the lands of mortals and winter alike. Torn between deadly choices, Miryem and Irina embark on a quest that will take them to the limits of sacrifice, power and love.

I had been looking forward to Spinning Silver ever since I finished Uprooted earlier this year. I had really been taken by Novik’s writing style, and the way she took ideas from traditional Russian folk tales and developed them into something so much bigger and detailed, with such wonderfully developed characters and flowing plots.

Spinning Silver didn’t let me down, I enjoyed it a lot – but, perhaps, not quite as much as Uprooted, and I think this is because of the split narratives. Where Uprooted had a single narrator, Spinning Silver follows the stories of Miryem, the Jewish moneylender’s daughter, Wanda, the farm girl who is abused by her father, and Irina, the plain girl whose father wants her to marry the Tsar. The story begins and ends with Miryem, and Wanda and Irina’s narratives appear as they are introduced to the story through Miryem’s actions. Then, later in the book, additional narratives are added – the Tsar, Wanda’s baby brother, and Irina’s maid all gain their own voices to move the story along. The reason for the different narratives is self-evident – the story is much less linear than that of Uprooted, with different strands in different areas weaving together to form the overall story. However, the constant switching of perspective was a little jarring for me, and it wasn’t always immediately clear who the new narrator was.

Inspired by Rumplestiltskin, Miryem finds herself in danger from the king of the Staryk, a race of ice fairies who raid the towns and villages every winter searching for gold. After taking over her father’s business, Miryem makes it more successful than it has ever been, and her grandfather jokes that she is able to turn silver into gold. The Staryk king overhears this, and appears with a bag of silver to be changed to gold, and Miryem has to use all her cunning to do so by getting her cousin’s fiancé to melt the silver and shape it into jewellery, which they can sell for a profit in gold. This Staryk silver is mesmerising, and the jewellery is bought by the Duke, and passed to his daughter Irina, in the hopes she can snare the Tsar whilst wearing it.

In much the same way I enjoyed the way Agnieszka was allowed to be dirty and unkempt in Uprooted, I took great pleasure in Miryem and Irina’s cold logic and problem-solving skills. Whilst they had affection for their families, broadly they were calculating and clever, weighing their options and working out solutions based on risk and reward. This trope of the clever girl triumphing over all is a common subset of fairy tale, but in a more fleshed-out novel it meant that they became delightfully cerebral characters, with a morality defined by their own understanding of the world and measured against the way the world had treated them and theirs. Wanda was an exception, for all she began as fairly self-interested, her narrative was earnest and sweet, and showed growing care and compassion for those around her, whilst she found the inner strength to develop.

Spinning Silver was inspired by Rumplestiltskin, with the weaving of silver into gold and bargains made because of it. There is also some discussion about the importance of names, although this is a comparatively small piece. The story almost reads like three fairy tales woven together, each with its leading lady, and I would be interested to know if any other stories did influence Irina and Wanda’s storylines. Miryem’s narrative first appeared as a short story in a collection of fairy tale retellings called The Starlit Wood, published by Saga Press in the USA in October 2016. I wonder if, perhaps, that’s why Miryem’s story feels the most complete of the three. Wanda’s ending is very much intertwined with Miryem’s, so I did not feel there was more to be said there, but I would have liked a further small epilogue for Irina’s story, just to give the last bit of resolution on her marriage and ending. The threads were in place to suggest the way it was going to go, but I would have liked to have seen them tied off nicely.

All in all, however, these were minor niggles and I did really enjoy this book. I am beginning to think I need to check out the Temeraire series, but there is something special about reading a particularly good stand-alone book, and knowing the resolution is all there within the pages in front of you. Especially when the book is as well-crafted as this.

Rating: 4/5 – I loved this, but I felt it wasn’t quite as perfect as Uprooted, because there were just a few more things I wanted resolved. I wouldn’t hesitate to recommend it, though, and my issues were extremely minor in the long run. I’d happily read this over and over.